EAN member, John Wade of Pescadero, CA recounts a very successful David and Goliath experience he had in early 1980’s.

In the 1970’s Leslie Salt Company was the owner of tens of thousands of acres of former salt marshes that were converted to salt ponds around the edge of San Francisco Bay in the 1930’s to 1950’s. They had a development arm that was building out the 800+ acres now known as Redwood Shores (part of Redwood City) and were also planning to build on 1,095 acres of Bair Island.

Due to cash flow problems related to geology, earthquake risk and FHA loan insurance, Leslie was unable to sell houses quickly enough to pay their loans. In 1977, Bank of America, Leslie’s lender, performed a shotgun wedding. “Leslie Salt, meet Mobil Oil; for a dollar plus the debt ($20 million) you are going to transfer ownership…”

In late 1981, after the build-out at Redwood Shores was well underway, Mobil Land Development proposed building 2.45 million square feet of office space, 3,720 homes, and an 800-room hotel on Bair Island, the largest unconnected, undeveloped island in San Francisco Bay. Local citizens and small groups of environmentalists did not think this was a good idea for many reasons.

At that time, however, Redwood City, a largely working-class city of 77,000 people, was known for its very conservative city council, low turnout in off-year elections, and a willingness to approve any development. And, in 1981-83 we were in the worst recession since the Great Depression; jobs were a real issue, particularly for construction.

By February 1982 the project was before the planning commission, and although there was little hope of success, a dozen uncoordinated people, local citizens, and a few from groups like Audubon and Save the Bay showed up to speak against it.

The planning commission was amazingly rude and hostile. One woman on the commission brought one of our youngest speakers to tears with her rudeness. It was very mobilizing. The vote was 7-0 for the project, and afterwards we gathered in the lobby to discuss what had happened and what to do about it. We felt we couldn’t let them get away with it without opposition. We exchanged contact information. Ralph Nobles, a brilliant physicist and his community activist wife Carolyn offered their house in Redwood City as a place to meet. We planned a meeting, and the fight began.

We met to discuss the issues, possibilities, objectives, and how to organize people before the city council rubber-stamped the proposal on May 5th, 1982.

In California, thanks to the Republican Progressive movement of the early 1900’s, we have Initiative, Referendum, and Recall among the political rights of citizens. With Referendum one can overturn an unpopular action by government, if you get it on the ballot and if you get a majority.

We had two months to gather 5,000 signatures of local registered voters to get it on the ballot for a November 1982 election. After a pro-bono attorney drafted the petition, we organized, talked to all our friends and neighbors, and tabled near shopping centers to reach people on the street. We did research, thoroughly analyzed the Environmental Impact Report, and developed carefully analyzed fact sheets of critical issues, problems, and impacts. We stayed focused on the effects on our community and environment, and avoided ideological theorizing.

By July we had ‘Measure O’ on the ballot. The city council, to confuse the issue, reverse-worded the ballot item. To oppose the project you had to vote Yes on the referendum.

It wasn’t a fair fight. They rarely are. Supporting the development were the City Council, Planning Commission, Chamber of Commerce, most of the realtors, all of the local newspapers, all but one of the labor unions, a team of professional PR people, and $159,000 plus staff from Mobil Land Development Corp. This would be comparable to $500,000 or more today.

On our side there were first 12, then 30, then 50 volunteers, and ultimately about 300 Redwood City citizens whom few had ever heard of before. The only mildly well-known person we had was Nita Spangler, a wise, retired crusading newspaper reporter from the 1930’s to 1950’s who was still active. We raised a total of $15,900 to put out one brochure, buy some lawn signs, and have a small storefront campaign office. We had no money for polling. I was the volunteer chief researcher. Others worked with the press, community groups, neighborhood groups, precinct walking, fundraising, and other activities.

We hired a campaign manager for a month, but ended it because everyone started waiting for her to tell us what to do rather than being creative and taking initiative ourselves as we had during the signature gathering. We went back to self-directed.

It was a hard battle. We had public debates and presentations. We recruited friends. We organized all the precincts and had people walking them. We talked to a lot of friends and neighbors. The opposition had people doing reconnaissance on us, polling, and multiple mailings. Some of our lawn signs were torn down.

The newspapers, normally pretty balanced and moderate in their reporting were dependent on real estate advertising and threatened with revenge by the chamber of commerce so they took a very biased position. The reporter clearly had her instructions and every article she wrote had a strong tilt for the development and against the environmental position. One particularly strange reporting tilt tried to paint us as rich outsiders, referring to one of our leaders, Mary Gorth, a local public health nurse, as “The Woodside Matron”, referencing the wealthy, next-door community where she rented a cottage. Suggesting that any of us were wealthy or members of an elite was pure fiction.

There were breakdowns. People wore out. There were misunderstandings. We kept going. We made sure our facts were right and clear. Traffic was bad on the Bayshore Freeway (Hwy 101). The proposal would add 100,000 vehicle trips per day and create an unmitigable mess on the major roadways and at all connecting intersections, at great public expense. The project would make the jobs-housing imbalance worse by 4:1, and provide housing only for the top 25%. Water and sewer capacity were tight. The promoters repeated “growth, jobs, housing, economy” with pretty suburban pictures and smiling people over and over. Ralph and I did most of the presentations, sticking to the impacts. Audiences rarely commented, but being straight and clear helped and a few said we were making progress.

We had Nita and Ralph, both very intelligent people with high ethical standards and records, and a lot of volunteers. A proud, well-known businessman with a shaky local reputation led the other side. It helped.

About 1/3 of the 34,000+ potential voters would never vote our way. About 1/3 would support the environment regardless. The middle third we had to connect with, and get out to vote in our favor.

By late October we had no idea how well we were doing, but things seemed to be competitive, and there were rumors we were surprising a few people.

On Monday before the election we were down to the wire. A precinct was turned in that hadn’t been walked. Three of us mobilized, went out and walked it until 9 PM. Others were doing calls and reminding people to vote. We didn’t quit.

On Election Day things were calm. San Mateo County has a well-deserved reputation for running honest accurate elections with quick results. In the evening we waited for the results at the campaign office. They weren’t quick this time. At 4:00 AM I went home, behind by two votes out of about 17,900 cast. The initial count at 8:00 AM Wednesday showed we lost by 17 votes. The other side made some mild victory statements to the press. The few hundred ballots that were turned in at the polling places remained to be counted.

The day after, about Noon, the final election results were announced. We were ahead by 42 votes out of 17,900 cast. A recount narrowed this to 40, but we had won against all odds. If 21 people had gone the other way we would have lost.

Mobil made a few half-hearted efforts to come up with an acceptable new plan over the next 5 years and finally quit the land development business. In 1989 they sold the Redwood Shores & Bair Island properties to a joint Japanese and Canadian partnership. In the 1990’s the Canadian company fell apart, the Japanese development boom and economy in Japan collapsed, Redwood Shores was developed fully, and in 1996-97 Bair Island was sold by the Japanese developer to Peninsula Open Space Trust on a cash-now basis. The negotiated price was $15 million.

Bair Island is now part of the National Wildlife Refuge system and is being fully restored. Redwood City is growing up rather than out. Traffic is still lousy on Freeway 101, but not as bad as elsewhere on the peninsula—and the Redwood City Council is more moderate and much less rude than before.

You can never convince me your vote or activism doesn’t matter. Shoe leather, honest facts and determined neighbor-to-neighbor connections can beat big corporations.

Leslie Salt was taken over by Cargill. Mobil was taken over by Exxon. Potential sea level rise of three to six feet around the bay seems to have discouraged new Bay land development proposals. But sea level rise could wipe out most of the 22,000 acre San Francisco Bay Wildlife Refuge by the end of the century. Sea level rise will cause great havoc in cities around the edge of the bay, costing hundreds of billions of dollars to manage and mitigate. Change and development pressure continue, and so does citizen action by those who love San Francisco Bay and life on earth. We can do it!

With global climate change we are in the fight of our lives to make sure we keep a livable planet for our children, their children and those who come after us. It can be done. We will succeed against all odds. 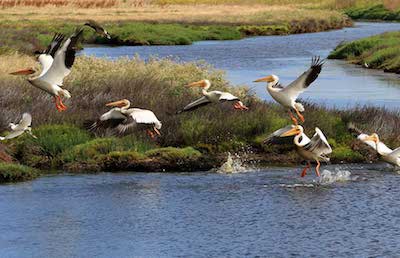 Join the EAN community and
stay current on news and events.